Almost exactly two years ago in 2008, on April the 22nd, the recovering Interplay had just sent out a press release announcing a new Earthworm Jim game to be developed in conjunction with an animated series and a feature film, with original author Douglas TenNapel working as a creative consultant on the game.

Conversely, earlier in the same month, Interplay had just “reinitiated its in-house game development studio, and [was] hiring game developers,” and vouched to “leverage its portfolio of gaming properties by creating sequels to some of its most successful games, including Earthworm Jim, Dark Alliance, Descent, and MDK.”

While we were all painfully aware of the financial and legal turmoil the company had just faced over the past few years, these exorbitant plans sounded good enough - at the very least up until the paragraph in the press release that also cited, in the same breath, the “Safe harbor statement under the private securities litigation reform act of 1995,” which so happens to state that “[t]he risks and uncertainties inherent in such statements may cause actual future events or results to differ materially and adversely from those described in the forward-looking statements.”

Hence: Two years, no game, no series, no film.

I’m sure it’s happened to you: you’re playing a game and you come across a weapon, or ability, or game mechanic that you just love, and you wish you could use it all the time. Only you can’t, because the developer has placed restrictions on it in the name of balance. It’s understandable that you can only use the Super Gravity Gun at the end of Half-Life 2, it being the most powerful weapon in the game. Valve know that restricting its usage makes it more fun to unleash on the Combine.

Where does the designer’s responsibility for making a game fun end, and the player’s begin? Should the player be given full reigns over the available tools or should the designer limit them? Greg Miller at IGN raises this question using a recent example, the detective vision mode in Rocksteady’s Batman: Arkham Asylum. The mode enhances Batman’s vision, allowing him to use his detective skills and analyse his surroundings. At the touch of a button, a blue visor covers the screen and renders the environment in flat shapes in order to help highlight important details like vent covers and enemies. The mode can be activated at any time and for however long as the player wishes; moreover, it lets the player see through walls and points out key information like whether enemies are armed, if a wall is destructible, and so on. Sounds like a win button, doesn’t it?

Note: This is Day 5 of “The Whispered World Week” at The Slowdown, and wraps up our coverage on the game and its creator for the time being. Big thanks for reading, and let us know what you thought in the comments section!

The Whispered World is finally out today in most of Europe. North American fans will have to wait a little longer still, as Viva Media pushes the game out the door next Monday. We hope this week’s coverage of the game has been informative and that you will all be able to enjoy the game to its fullest when you finally get your hands on it today, on Monday, or later down the road.

As we wrap up with our coverage on the game here at The Slowdown for the time being, I thought it would be pertinent to leave you all with a thought for tomorrow. Below, a piece of concept art for Marco Hüllen’s next personal hobby adventure project, Limbus: 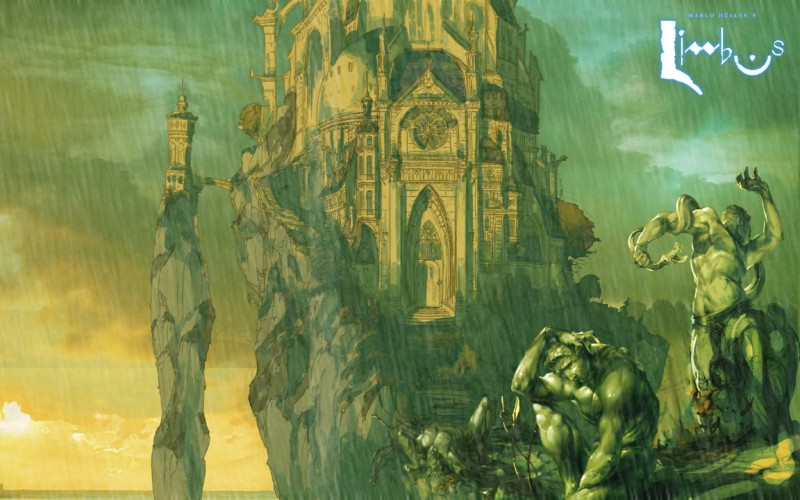 In the promotional image above, the snake-wrapped figure on the right instantaneously recalls the influence of variations of the Hellenistic monumental sculpture, “Laocoön and His Sons.” While Marco confirmed this, he remains tight-lipped on its role and symbolism in the game’s context.

“Limbus,” then, refers to boundaries, borders and edges - all present in the image above, whether in the steepness of the cliff, the bridge, or the sea below. Additionally, since the third statue lies wounded in the back of the foreground, and each these characters are clearly in various types of torment, this all points our attention towards the Roman Catholic concept of the Limbo, which also ties in with the Roman-style architecture of the image.

Above, a series of character sketches from the game (including Aurora and Nicodemus, two of the three lead characters, and Nox). A translation of Hüllen’s official storyline for the game is as follows:

Limbus is set in a fictional future in which the world has been in chaos for many years, as people have suddenly begun to remember their past lives. As people are no longer afraid of death, they go about living their lives light-heartedly. Crimes are abound, wars raging and nothing can prevent the madness of mankind.

But then the Triplets are born. They alone can not remember their past lives, and their task will be to end the madness of the world.

The player assumes the role of the triplets Aurora, Nicodemus and Orlando, who must return to the villa of their childhood, to uncover the mystery of their lives and the entire mankind. The three are pursued by a secret sect, who eventually will have something to do with their secret.

During the story the three will have to visit crazy places like the city of the children and the city of the elderly, and meet many crazy characters, like the child Linus, who has opened a museum of his past lives, as well as creatures such as Nox, who lives in their villa.

In our interview, as inspiration for this forthcoming project, Hüllen cites Jean-Pierre Jeunet’s Amelie and the music of Yann Tiersen. At the moment,while the author admits to currently working on a demo, he is not yet very far in development, and as such not actively looking for publishers yet.

Note: This is Day 4 of “The Whispered World Week” at The Slowdown.

It has been a while, has it not?

Not only is this game a long six years in the coming, but we have also not been treated to a high-resolution, 100% hand-drawn point and click adventure game in aeons, as even The Biller’s painterly A Vampyre Story and Pendulo Studios’ latest stylised offerings have resorted to 3-D in justified attempts at providing relief to the heavily budgetary nature of animation. And who could, in their right mind, blame them for doing so?

But still - one hundred percent. In light of the above games, that striking statistic alone makes Marco Hüllen’s The Whispered World stand out from the pack – and boy, does it ever: There is a breathtaking array of various character animations – actions, emotions, expressions and movements - that quite possibly has not been seen before, at the very least not since the heyday of the genre in the latter part of the 1990’s.

Perhaps the closest touchpoint in terms of the game’s graphical look and feel, then, is not to be found in the gaming medium at all, but among lead artist Hüllen’s primary influences: Japanese anime and classic children’s animations, like Spirited Away and The Last Unicorn (a cut-scene example on the left)?

As things stand, every forthcoming review of the game will surely be gushing all over the graphics in the manner above. Therefore, we should probably move away from discussing the Captain Obvious -grade graphical prowess of the game and instead touch upon other aspects of the demo, the aspects that may potentially set the game apart from its counterparts.

END_OF_DOCUMENT_TOKEN_TO_BE_REPLACED

Note: This is Day 3 of “The Whispered World Week” at The Slowdown.

In today’s interview, we talk to the original designer and primary illustrator of The Whispered World, Marco Hüllen (on the right), in the hopes of shedding more light on the curiouser details of the development process of the game - especially, on details that are still left uncertain for non-German audiences.

After all, German fans of the adventure game have had the privilege of reading Marco’s posts on various adventure gaming forums - as well as having already played the game. For those of us not yet in the know, the interview below should hopefully reveal some further facets of the make-up of the wildly imaginative ride that is the six-year development process of the game.

Finally, please do remember to take a look at our introductory post to The Whispered World – the article, written in conjunction with this interview, details the game’s history from inception to conception, between the years 2004 and 2010, and should by all means get you better prepared for the game’s release on the 23rd.

A special thank you goes to the very genial mister Hüllen, who braved our questions despite a minor language barrier. Therefore, the interview has been translated, from German into English, by Martyn Zachary and Richard Scary for The Slowdown. The original answers, in the German language, will also be published on the website later.

The Slowdown: After having worked so long on a project that began way back in the first half of the 00’s as an university project, are you feeling any fatigue now that the game is finally coming out?

Marco Hüllen: A little, but the joys do outweigh the fatigue. When I first started work on the game, I never expected it to become such a marathon for me. Much has been enjoyable, and a lot was equally frustrating. In the end it all came together nevertheless, and with that in mind it has all been worthwhile.

How long have you been working on the game, exactly?

Oh, it has already been quite a few years: I started work in the year 2004, with The Whispered World as the topic of my diploma thesis. When I completed my degree in late 2005, I made the decision to develop the game further at Bad Brain Entertainment, for whom I had done graphics on some other titles during my studies.