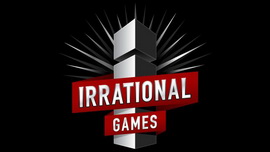 The past week has seen some irrational behaviour on a strange teaser site, whatisicarus.com. Initially there was nothing to see but a smoky background and a single grey spot, not much of a tease. But sharp visitors noticed that the white spot changed position every day, making a slow but deliberate migration around the page. It was a few days before the overall shape was discerned: a figure 8 or vertically-oriented infinity symbol, and the spots looked instead like holes cut out in the black, revealing something underneath. The site has now started to update much faster, and so with a little bit of obsessive refreshing a complete image can be recreated. What is that thing, exactly? A logo? An obscure literary reference?

Internet detectives have traced the site’s domain registry info back to Take Two games, and a rumour some months ago connected the project codename ‘Project Icarus’ to Irrational Games1, so it wasn’t difficult to put two and two together. However the company made no acknowledgement of it until yesterday in a tweet.

Things have been building up to this for a while now. Irrational came out of hiding in the beginning of the year with a shiny new site and a focus on community and company culture. Since then they have stuck to a regular schedule of updates that includes podcasts, employee spotlights and a look into the company’s back catalogue with previously unreleased material. Earlier this month fans were invited to call in and try and guess what the new game was going to be2, and the clips were featured this week in the latest episode of the Irrational Behaviour podcast.

At long last they have addressed the pressing question of what they’ve been working on since their seminal BioShock three years ago. We thought it was an X-COM remake, but it turns out that that’s someone else’s project. Rumours point to it being a brand new IP in the form of an “ambitious” FPS3. So what is it and when will we know? Invitations have been sent out to a press event in New York on August 11, where they will unveil a demo to journalists. The next day will bring us a CG trailer and more information in the next podcast.

It’s been a long wait for fans, but finally we’ll get a chance to see the highly anticipated mystery game; the 12th can’t come quickly enough. I want to know just what the heck Icarus is.