Rockstar Will Be Rockstar

The hot topic of the week was Rockstar’s Tiger-like, sudden fall from PR grace. The boulder started rolling downhill on the 7th, when a thick and elaborate blog entry, “Wives of Rockstar San Diego employees have collected themselves” was published at Gamasutra. The post was a call to arms by the wives of Rockstar employees seeking to highlight the workplace injustices perceived to exist at the studio. The post gained considerable momentum in the press and ultimately produced a circulated internal response on the 15th.

But that’s not really all: Springing up like mushrooms after the rain, we have actually received a barrage of various reports more or less in accordance with the Rockstar wives’ complaints. To recap, we have already discovered the dazzling Red Dead Dedemption (on the left), very much awaited here at The Slowdown, to have had an extremely arduous development path. We have also heard how there are other issues afoot at Rockstar San Diego and how Rockstar quietly settled a telling class action suit with over 100 employees the April of last year.

In addition, we have read subsequent allegations of how Max Payne 3, in development at Rockstar Vancouver, is being similarly mismanaged. We’ve written about Max’s questionable Brazilian wax before, so you can consider that more fuel for the fire. Be as it may, yesterday, Rockstar finally officially responded, though in veiled and indirect fashion, to the swirling sea of speculation above.

Their weapon of choice: A series of wallpapers.

Not a press release, a formal apology or a letter of resignation, but wallpapers, one of which presents an Eye of Sauron –like entity hovering above the Rockstar logo, to be exact, in direct reference to an MTV Multiplayer article1, where a former Rockstar employee is reported to have compared the company to Tolkien’s persistent and ever-present evil eye. 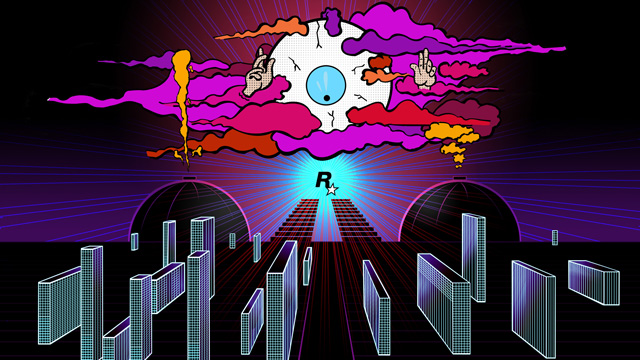 Overall, we have all learned to cope with and even expect stunts from Rockstar. “Boys will be boys,” right? And why the heck not - these are the kind of stunts that continue to successfully award Rockstar presence in the gaming press space over other publishers. I certainly found myself compelled enough to go ahead and write this recap.

There won’t be a sales backlash, either - the general public does not read gaming news, and I fail to imagine a successful boycott organized in objection to the above. This time, though, the response feels cruel and distasteful, a tangible manifestation, in illustrated form no less, of the workplace insensitivity currently breeding at the various Rockstar studios.

Let me put it like this: Even it comes to light that each and every of the above news items were nothing more than fabrications, twisted half-truths and exaggerations, I think the above image grossly belittles the potential existence and presence of physical and emotional stress several Rockstar teams are surely experiencing under the massive expectations of millions of players.

I personally cannot begin to fathom their burden, but I do think someone at Rockstar should.