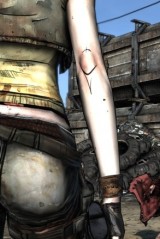 With a potent New Game+ and the recent releases of The Zombie Island of Dr. Ned and Mad Moxxi’s Underdome Riot, Borderlands has stayed relevant despite its curiously constructed, abrupt plot arc. Andrew Vanden Bossche’s GameSetWatch column, “Design Diversions: Anatomy of a Gun,” for instance, points our attention solely to the guns:

“Borderlands exudes style, character, and charm for a good half hour before dropping it. It’s regrettable since the game has so much going for it in this department: colorful characters, a vibrant but derelict landscape, and an alien society of corporations and vagrants. … After all, the most important characters in Borderlands are the ones players can never look away from: the guns.1

Having beaten the game with people I’m great friends with, Borderlands became a frictionless experience as we decided to split up weapons and classes evenly from the get-go. My question to you is, then, how do you solve the sharing issues that the game, at its worst, can present? Let’s assume the worst-case scenario: Four players enter the game with the same class and weapon proficiencies.

Hopefully we can get a good enough tally of votes to draw some conclusions - please vote accordingly, and if you have any tasty stories, good ideas or general tips relating to the poll, do post those in the comments section! Finally, if you have any friends who you played with, please do forward the poll over to them as well. Thanks again, everybody!